Too often, the Philadelphia sports fan has been dismissed as a lout, a boorish dolt immune to reason, his vocabulary whittled down to a singular “boo.” This is particularly true when it comes to Phillies fans, who, to those whose memories reach beyond the team’s recent run of unprecedented good will can recall, are more likely to turn on their team than any other in the city. Although the Eagles, Sixers and Flyers may hear it from the rafters when they’re not going well, only the Phils will hear it when they are. The strained relationship between the city and the Phillies, however, has deep historical and sociological roots; roots that directly correlate with the city’s self image. The Fall of the 1977 Phillies explores these roots by providing a social history of Philadelphia through the lens of its professional baseball teams – first, the beloved Athletics and later, the (until very recently) despised Phillies. It traces the roots of the city’s inferiority complex back to its origins in the early 19th century and examines how, over time, the city’s loss of national stature in the political, financial and intellectual arenas (much of this at the hands of jealous New Yorkers) eventually changed the character of the city altogether. For where once optimism and progressive thought abounded (it was, after all, the New World home to the colonial age of Enlightenment), negativity and cynicism soon became the city’s calling card – hostile traits that eventually found in the floundering Phillies a perpetual whipping boy.

This book likewise charts the gradual lifting of the city’s collective spirit starting in the 1950’s, when a collection of political “Young Turks” led by future mayors Joe Clark, Richardson Dilworth and city planner Ed Bacon overturned the corrupt local Republican machine and set Philadelphia on a course of reform and renewal that by the 1960’s and ‘70’s would be hailed nationwide as one of the few successes amid the failure of urban renewal in virtually every other major American city – most notably New York. As a result, Philadelphia shed its inferiority complex and truly embraced the revived Phillies – who, as a result of the building boom, finally escaped deteriorating and depressing Connie Mack stadium, relocated in palatial, pristine Veterans Stadium and hence became the face of a city reborn -- for the first time. These good feelings swelled during the 1970’s and reached their peak during the summer of 1977, when Philadelphia seemingly thrived while New York teetered, occasionally in the dark, on the brink of bankruptcy. On the field, the Phillies put together what many believe to be the best team in their history, their 1980 and 2008 world championship teams included. By the start of the 1977 League Championship Series against the Dodgers, it seemed clear to everyone that this Phillies team, much like the city of Philadelphia, bore no resemblance to its inglorious past.

The events that unfolded both in the stands and on the field at the Vet during the afternoon of what has become known in Philadelphia simply as Black Friday (October 7, 1977) would change how Philadelphians viewed the Phillies and ultimately themselves for the better part of the next three decades. After Black Friday (considered by some to be the worst single moment in Phillies history, eclipsing even their infamous 1964 collapse), Philadelphians would question whether things really were as different with both their team and their city as they were led to believe. By the game’s disastrous end, it would become clear that these Phillies had much in common with the bumbling teams that preceded them and soon, as events would unfold in the city that cast the reforms of the Young Turks in a darker, harsher light, the Phils would once again become the face of a city awash in doubt and self loathing. The Fall of the 1977 Phillies uses this game to form the structure of a book that puts the city’s relationship with the Phillies into a larger, societal context as it attempts to figure out just why it is that Philadelphia seems to find itself so distasteful. 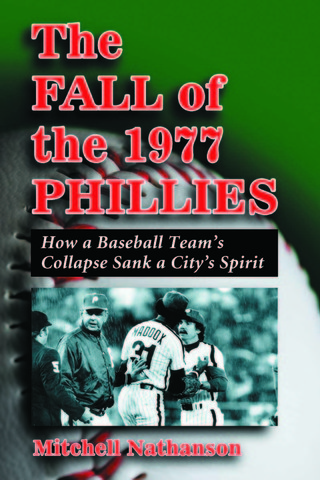